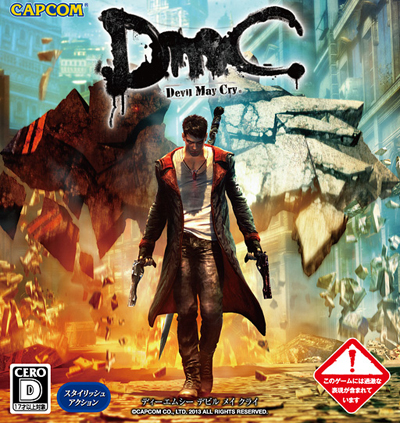 The reaction when a beloved franchise falls into new hands is one that is almost always met with skepticism by those with a strong reverence for something they probably hold a nostalgic connection with. Worries about whether or not a re-imagining will stay true to its roots, whether drastic changes will be made to cater to new, previously excluded markets – perhaps in favour for the old – and a general fear of change often plague a fan’s mind. There have been a range of reboots over the past few years as publishers and developers want new perspectives on established brands, sometimes in an effort to combat challenging economic times, whilst others to stop a series from becoming stale and outdated.

When Capcom revealed that Ninja Theory would be taking the reigns of critically acclaimed Devil May Cry series fans were jaded to say the last. Given the studios recent pedigree with Heavenly Sword and Enslaved: Odyssey to the West they really shouldn’t have. DmC is not only the Cambridge-based studios best release yet, but quite possibly the best in the series. 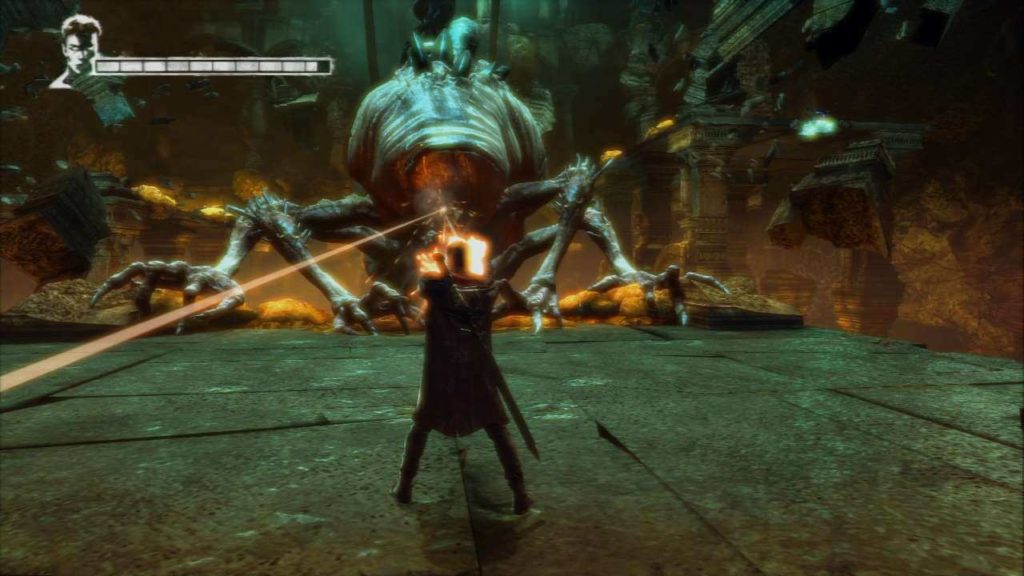 Following the immensely successful original title, Devil May Cry took a nose dive for its second outing before regaining some pride in the third and fourth iterations – the latter being the first on the current generation of consoles. Nearly five years have past since its release and it’s time for a new name, a new setting and a new look.

It’s this makeover for protagonist Dante that had many up-in-arms over his new emo-styled appearance. Regardless as to you like or dislike the Son of Sparda’s alternative outfit, it’s his brash and egotistical personality that is of most interest. Out of context, his cocky self-confidence could be rather grating, but with his past and the motivations for his actions explored – plus some extremely witty one-liners thrown about – he’s remarkably likeable. With both Angel and Devil part of him seeping out, he has an assuredness about him that is apt self-confidence rather than arrogance. A centred moral compass sees a bond grow as he becomes an incredibly empathetic character – not to mention he’s an utter badass as well. 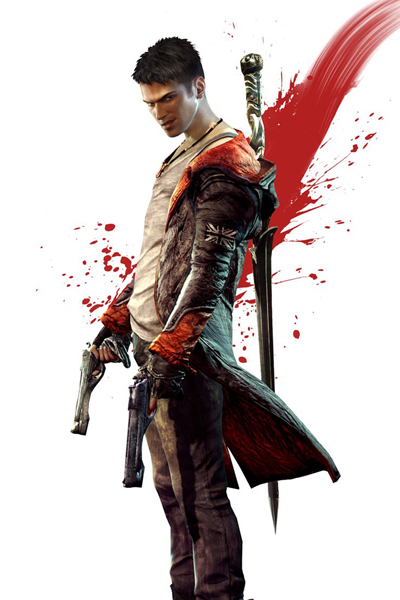 Avoiding a life of solitude Dante collaborates with Kat and Vergil, members of ‘The Order’ – an organisation labelled terrorists by press propaganda – to take down demon antagonist Mundus. The majority of game time takes place within the twisted Limbo City as you fight off the inhabiting demons and monstrosities. With walls and buildings that try to crush you as the floor is devastated ahead of you, Limbo is a dangerous place but one that is a sight to behold.

Bold use of colour provides a glorious palette for Ninja Theory to work with and it gives Limbo a sense of life all too often lost in modern titles. Tinges of red and hints of blue are prevalent and the vastness and detail of some worlds lead to some astounding vistas. The urban aesthetic is wonderfully spliced with the gnarly tones of a demonic world and the shift from a Japanese demographic to a more Western one is evident through the city-scape vibe. Although the game was as smooth as Dante’s young face and as gorgeous as Ebony and Ivory. perhaps the biggest argument against DmC in terms of its ocular input is that the hardware seems to be holding it back – just what this could have achieved on next-generation hardware is something truly exciting.

Limbo City is not just a sight for sore eyes though: the level design is exceptional. Variety, scope, execution; it’s all fantastic. As is the case with the hack’n’slash genre, there’s plenty of battle rooms for you to dispatch enemies in clinical fashion, however, the platforming sections – using an Angel pull and Devil push on pre-determined environmental objects – work surprisingly well and help eliminate what could have become a monotonous progression through a series of arenas. Instead it feels almost dynamic and unscripted in its nature and ensures that a glorious pace is set throughout.

Listening to the thundering neurofunk and dubstep beats and riffs of Nosia’s soundtrack enhances the experience as it is the perfect harmony for the game’s tone. It’s accompoinement to the advancing plot is ideal and ensures that – including the voice work for Dante and co – DmC sounds just as good as it looks. Whilst nothing overly gripping the story and understanding of the demon world is slowly revealed, and with some twist and turns along the way it’s certainly nothing to hold it back.

Of course though, it’s the combat that will make or break the Dante’s re-envisioned adventure. With precise and responsive controls, a mind-boggling yet achievable variety of combos and an immensely satisfying outcome, DmC’s combat is a rival for any. The combination of weapons – your regular Rebellion sword, a weapon such as twin pistols Ebony and Ivory, plus an Angel weapon, and Devil weapon – allows for a huge array of possibilities. The Angel attack is mapped to the left trigger, whilst the Devil is mapped to the right, meaning you can quickly change between your three modes of attack with ease. Throw in some low-powered by combo-extending shots and you have a recipe for annihilation.

Some enemies can only be harmed by particular attacks, whilst the variety of enemies grants a greater utilisation of your arsenal. Whether it’s attacking a horde of low-health targets or a single beast that requires you full focus, combat is exciting and extremely enjoyable. The enemies get progressively harder as you advance which sees the game maintain a wonderful difficulty curve, yet granting the opportunity for some sadistic combos. Boss battles, although following the age-old ‘learn the pattern and repeat thrice’ rule, are diverse and are a far greater challenge and scale than any normal foe. Their usage is key to particular acts in the ongoing storyline all the while acting as yet another excellent alteration to the usual combat mechanics.

With level ranking, collectibles and a leaderboard in place, there’s a powerful itch to better your friends and this is likely where DmC will find it’s replayability. When a game is just this good and quite so joyous, it’s hard to not want to give it another whirl.

Ninja Theory weren’t afraid to make changes to a beloved franchise and they’ve set about a forward path for DmC that will surely see more iterations. It’s one hell of a reboot and with a balanced combination of gold-standard combat, world-class design and polish that ensures everything runs without even the tiniest of hiccups it’s a real testament to the quality of the studio behind it. It may be the first major release of 2013 but one thing’s for certain: come the end of the year, DmC will still be one of the best games this year.