Amnesia: A Machine for Pigs

It’s still absolutely worth your time. I hope you play it, and I hope you don’t enjoy it. 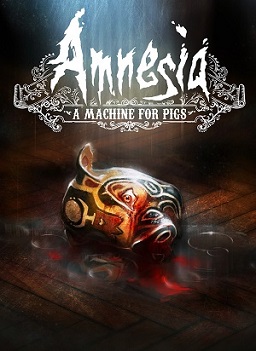 When the e-mail came through with my Amnesia: A Machine for Pigs code, I was initially very excited. After all, I’ve written before about how great I think The Dark Descent, how it was unique among horror games in that it actually scared me. But then, the more I thought about it, the more I was dreading playing A Machine for Pigs. That’s a good thing though, I knew I wouldn’t enjoy playing it. That’s exactly what I wanted from it, and in many ways that’s what happened.

Developed by Dear Esther developers The Chinese Room, in conjunction with series creators Frictional Games, Amnesia: A Machine for Pigs is a first-person, atmospheric horror game that revolves around its story as opposed to combat. It tells its story through a mixture of hallucinations, audio logs and telephone calls from a mysterious stranger. All you have at your disposal is a lantern. You have no way to fight back against the terrors you face; it’s terrifying.

You experience this through the eyes of Oswald Mandus, a wealthy industrialist in late 19thcentury Britain. You wake up, dazed and seemingly unable to remember much about what’s going on in your mansion, seeking your children who have wandered into the area under the mansion. As you progress, you hear the voices of your children calling for you, asking for you to find them. Their voices echo and sound like the children in older horror movies, the stereotypical, freaky twins. You’ll see glimpses of them as you progress through the grounds, and though your goal is to find them, there’s that niggling feeling that perhaps you, as a player, don’t want to.

It’s one of the many devices The Chinese Room uses to create shock horror in the game, which is one of the many differences between A Machine for Pigs and its predecessor. The horror is very different, what’s used to scare you feels less organic than before. Whereas The Dark Descent used its atmosphere as its most aggressive scare-tactic – the creaking of distant doors, the sudden piano playing behind you, the howling wind outside; A Machine for Pigs achieves it a bit more traditionally; it uses jump scares.

The random barrel rolling across the floor as you round the corner, the fleeting sightings of your freaky children and the game’s main enemy (which I won’t spoil for you), the random scream of a woman from the distance. These are all designed to get a jump out of you and put you on edge. It’s quite a contrast to the first game where it was a constant stressful feeling as you played. Your heart was always pounding, and that was the main reason why it was so scary. Yes, the enemy encounters attributed to that (we’ll get to that in a minute), but atmosphere was the primary source of anxiety.

A Machine for Pigs’ jump scares do the game a disservice I feel. It’s not as If the game doesn’t create a really oppressive, freaky atmosphere, it certainly does that. But the jump scares take the focus away from that. The constant, random shaking and fixtures falling feels out-of-place in terms of what Amnesia should feel like. This is made primarily by the Dear Esther developers, a game full of atmosphere. I wish The Chinese Room had a bit more confidence in their atmosphere and story being the main scare-factors.

It’s a pity, because the story and setting are much better. The story feels more cohesive, more engaging. The idea of this underground machine that is used for a terrible purpose, one that’s both incredibly shocking and completely terrifying as the backbone of the story is great. It feels inherently more sinister, and what it creates, well… that’s a moment I shall not ruin for you, but I will tell you it leads to a more tangible, and thus more terrifying enemy.

The soundtrack is another much improved element of A Machine for Pigs. Created by Jessica Curry, the soundtrack fits incredibly well with the game’s atmosphere. It’s extremely well paced, varied, styled and performed. It’s tense and really accentuates the feeling of dread as you play the game. The more you progress through the grounds of the mansion, the better and scarier it gets. The highlight for me was a particular section in the main area of the church section I literally had to turn the game off for a while and compose myself before I returned to it. It was terrifying.

The game has also seen an improvement in the graphical department. The mansion’s décor is rendered really nicely, and all the textures have had an upgrade over the previous game. It has an incredible assuredness in its style which creates a consistency that few games reach. Smoky effects in the outside areas are great at making everything more bleak, more hazy and reducing visibly. It runs really well with everything maxed out, although I did have a problem with screen tearing. Despite having vertical sync turned on constantly and getting a consistent, smooth framerate, the game was still littered with torn frames, which shouldn’t happen.

An area where previous fans may have concerns, and an area I had concerns in is the gameplay area. There’s no inventory management this time around, no lantern oil, no sanity meter. While your lantern will flicker or shut off to restrict you during certain areas or encounters, it’s never an issue. This reduces some of the game’s difficulty. I understand why The Chinese Room felt the need to streamline the gameplay, and I didn’t find myself missing those aspects, some of the more hardcore Amnesia fans may find this a problem.

All in all, I’m glad to say I didn’t enjoy my time with Amnesia: A Machine for Pigs. That’s a good thing. Amnesia, to me, is a game that’s not meant to be enjoyed. It’s meant to stress you out, it’s meant to scare you, you’re not mean to have fun. While it falls down in certain areas, such as some technical issues like crashes, and the way it attempts to scare you, it’s still absolutely worth your time. I hope you play it, and I hope you don’t enjoy it.