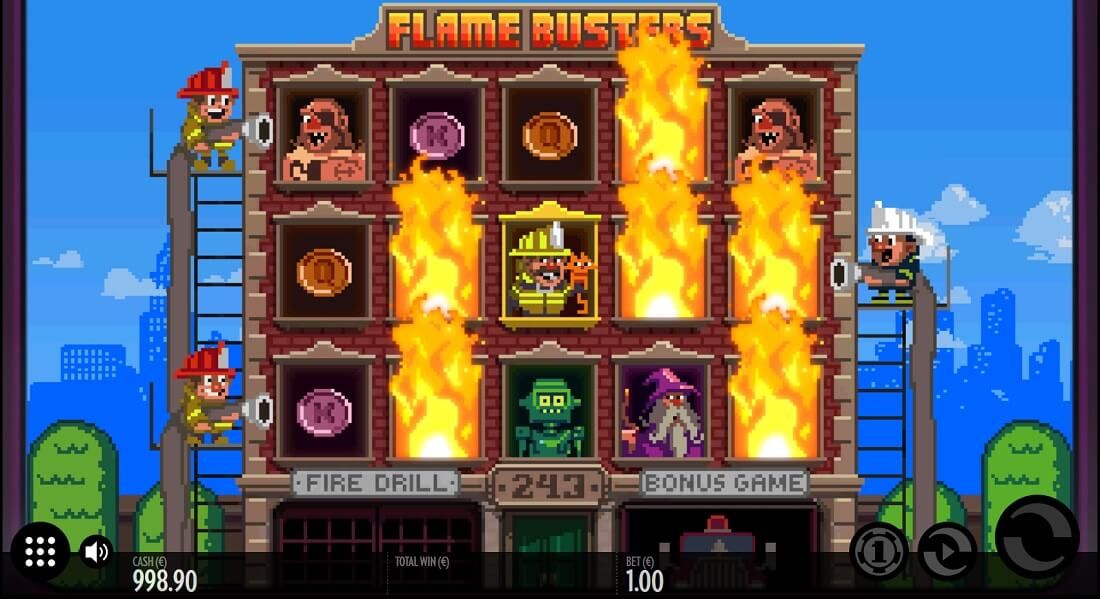 In a fire-burning fashion, both the slot and its producer, the software providing company Thunderkick, are bound to light up the industry. Their slot titles regularly feature some retro element or other, and in the case of Flame Busters, the developers seem to have outdone themselves. Just make sure you’re informed about all the features and rewards on the reels and you should be good to go.

Flame Busters have one of the most unusual reel grids in the industry – instead of regular rows and columns, these place the symbols inside a 3-story building, with 5 windows on each floor. This means that the reel grid is 5×3, only the symbols appear through the building windows, and can disappear just as easily as soon as they catch fire.

Starting with the lowest-paying ones, Flame Busters includes standard symbols T, J, Q, K and A, through to the higher-valued ones, everything is reminiscent of the old arcade video games, with pixellated graphics and animations. The characters represented on the latter type of symbols are designed in the same manner, which is why they include a wizard, pirate, robot, alien and a fireman.

With 243 ways to hit a win, and a team of firefighters to help you handle any situation, players should be thrilled to invest their stakes with this Thunderkick release. Other than the aforementioned symbols, which provide a reward when found on an active payline in a suitable combination, the orange W-symbol is the slot’s wild, while the alarm bell is the scatter.

The main bonus round feature you can hit at the Flame Busters’ expense is the one with the fire alarm symbol – the scatter. Namely, the minimum of 3 of the same symbols hitting the reels at the same spin will get you 10 free spins, while 4 and 5 symbols maximum will get you 15, i.e. 20 free spins, respectively.

During the free spins bonus round, the players’ goal is to collect as many scatters as possible. A group of three alarms unlocks an extra floor and thus, greater winning potential due to the fire symbol that appears on these newly-built floors, as well as two additional free spins.

There are two other bonus features available to Flame Busters players – the fire symbols that have just been mentioned, and the fire drill. Starting off with the first, the fire symbol can practically land on the reels like any other symbol, but the firefighters extinguish it in order to turn all the rest on the same reel into matching symbols – and ultimately increase winnings. Only the scatter and the wild cannot be subjected to the firefighters’ power, but they are already useful in most symbol combinations.

Finally, the last bonus feature found on the Flame Busters grid is the Fire Drill. As the name suggests, it’s practically a drill during the base game for the fire symbols that are primarily intended for the free spins bonus round. Namely, a fire symbol lands and gets extinguished by one of the firefighters, and thus changes all other symbols on the reels into matching symbols. Once again, the scatter and the wild are excluded from the rule. 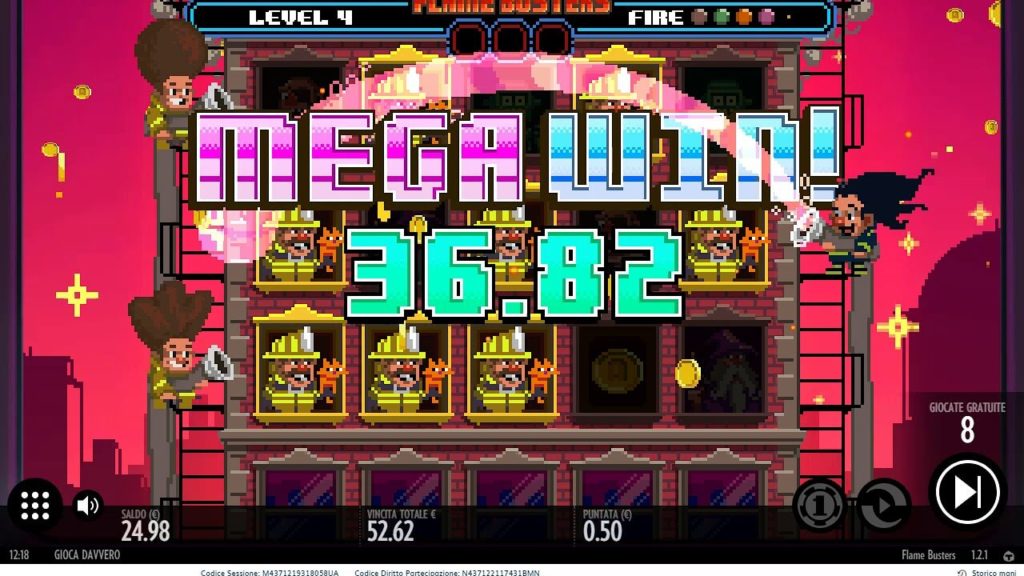 Where Can You Play The Flame Busters Online Casino Slot?

There are many online casinos that offer Flame Busters in their game portfolio. We would however recommend two gambling sites:

Casumo: It’s the first online casino which introduced gamification. One registered you are assigned your own “Casumo” character that you level the more you play. Whenever you level up you will receive various rewards such as free spins and other bonuses. Casumo also offers a very generous welcome bonus package. Read more at www.casinoreviews.net.nz/casumo/

Vera&John: This is sort of an old school casino that has been active for ages, but they are still one of the most popular online casinos. Their biggest strength is that there’s always happening something at Vera&John. They have these massive casino promotions where players can take part in prize pools over $100 000. Read more about Vera&John at www.manekinekocasino.com/verajohn-review/

As you can see, Flame Busters have their own fair share of bonuses, features and rewards. While they may not be the best high-variance slot there is, Thunderkick’s ability to make it stand out from the rest and appeal players with this characteristic is what makes this slot a worthy online casino destination. After all, those who play with fire at Flame Busters are more likely to cash out than to burn out.